A traveling nurse, Verena, finds her next home in Italy to attend to a boy who has stopped speaking since the tragic death of his mother. While there, she learns more of the woman who is missed and the whispers in the walls that encompass the property.

Right, so this is not a horror movie. This can safely be filed under Gothic romance with an emphasis on drama, rather than thriller. It abides by the perfect Gothic formula; a lonely foreigner who comes to live in a huge, mysterious house with even stranger inhabitants and they slowly but surely learn its devastating secrets and get swept up in them. Follows it to. a. tee. So if you’re into that, jump right in. However, you won’t find any thrills of substance. Rather, you’ll hear a bump or two in the night, nothing to piss the bed over though.

The ghost bit of Voice from the Stone was either lazily done, confusingly executed, or shamelessly transparent (heh heh). It left very little to the imagination and it took no effort to finger the phantom, so to speak. There was no mystery to unfold here and it left a lot of want in its happy wake. The title of the movie is quite  literal and the word ‘stone’ is thrown around. A lot. To the point where you’re not sure where to lend your focus; the house, the family tomb, the quarry, the little stone everyone plays with, everything? Should we just rely on the fact that all the stones in all the areas contribute to the overall meaning? I don’t know. I didn’t latch on like I would have liked to, nor did I feel like it was anything crazy amazing to latch.

Emilia Clarke’s role as Verena wasn’t the strongest performance in the film, which was unfortunate considering she was the lead and most of the camera’s focus was straight on her harshly shadowed face. Edward Dring, the young actor who portrayed the troubled Jakob, brought his creep game with full force. But not even he and his superb broody face could secure this a haunting film. It’s more of a period drama honestly, since it’s set in the 1950s and showcases plenty of lingering gazes, lost love, and fond memory flashbacks.

So be wary, horror enthusiasts; ignore that advertising and that seemingly eerie screenshot. This will leave you blood-less. And not in the way you crave. 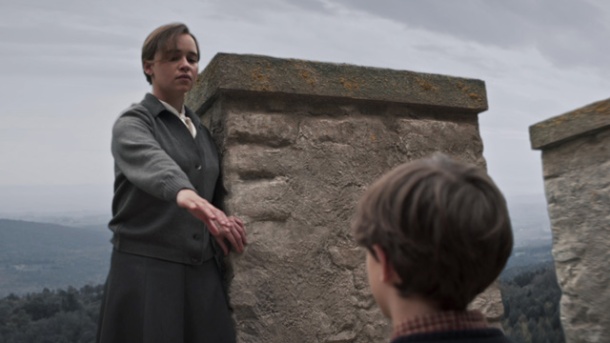 Wanna warn your fellow freaks or give your romance-loving friends a head’s up? Share!